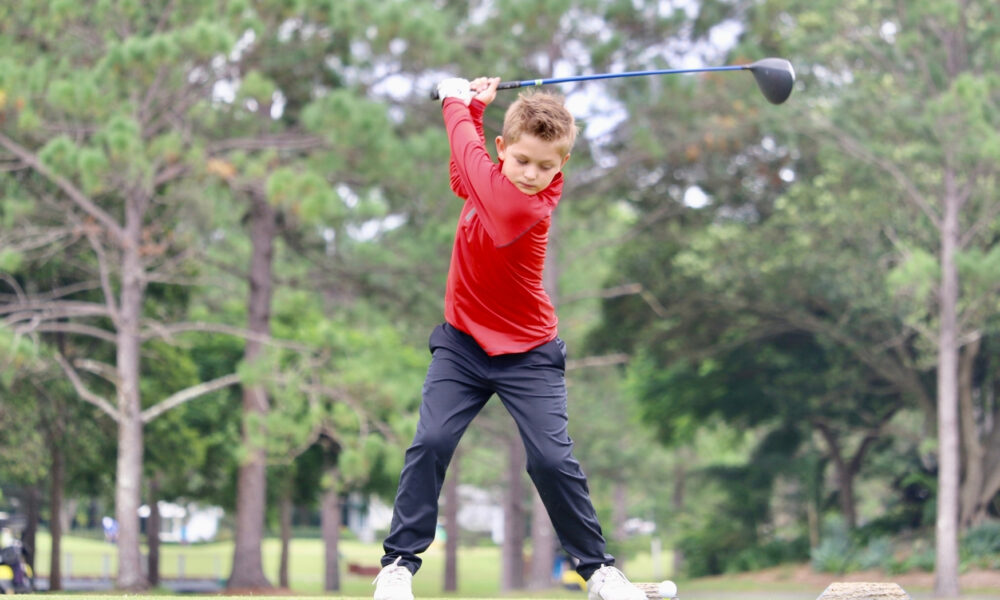 Jackson Castle “On Course For The Big Show”

It’s a pristine Friday afternoon and Jack Castle has knocked off early from school. He’s here for a lesson on the driving range at Pittwater Golf Centre, where decked out in polo shirt, knee-length shorts and cap he looks every inch the accomplished player. And that’s before he unveils a swing that would have impressed Ben Hogan.

When you’re seven years old you don’t bother limbering up. Practice swings? Also superfluous. With precisely zero ado Jack uses his 8-iron to knock a dozen balls high and true into the near distance. The sound at contact – a crisp thwack – indicates this Mona Vale lad plays at a level incompatible with someone who is the same age as Prince George. Jack and his coach of three years, David Saunders, repair to a nook on the edge of the range to study video of his swing. “Very nice,” Saunders mutters, as much to himself as to Jack. Analysis complete, Jack returns to the mat and pulls out his driver. Using reduced-flight balls he still knocks them out there 150 metres. “With normal balls my best drives go 170,” says Jack, who finished the 2020 schoolyear as the tallest kid in first grade at St Luke’s Grammar School Bayview.

A teaching pro for more than 40 years, Saunders takes a seat and together we watch the boy’s next round of shots. Is he the best you’ve seen at his age? “No question. Not even close,” says Saunders. “It’s frightening. He makes grown men cry because of the way he hits it.” Would you place any limits on what he could achieve? “None whatsoever. He could be the next phenomenon. When I say that, he doesn’t have to be the next Tiger Woods. He could be the next Adam Scott, say, or the next Marc Leishman. But he could be another Tiger Woods. He’s that advanced. He can spin the ball. He can make it run. He can hit it low or high, draw it, fade it. He can hit any shot you like.” The boy blocks a couple of iron shots and Saunders directs Jack’s attention to his downswing: “Just get that butt [of the club] pointing at the ball a little bit more, big guy.”

When Jack was 18 months old his maternal grandparents gave him a set of plastic clubs. Within a day he was swinging expertly, sending balls soaring across the backyard. He started lessons at two with Leon Faulkner, founder of Golf Rocks Kids Academy. Coaches who’ve worked with Jack marvel as much at his work ethic and concentration as his talent. Jack is a junior cadet at Bayview Golf Club and shines in the US Kids Golf Sydney Local Tour.

Indeed, he’s Australian champion in US Kids for his age and qualified for last year’s World Championships at Pinehurst, North Carolina but couldn’t go because of COVID-19. He spends 15 hours a week playing or practising. His next big tournament is April’s Australian Junior Age Division Golf Championship at Royal Pines on the Gold Coast. Lesson over, it’s time for a cold drink with mum Brooke on a bench near the pro shop. Jack looks you in the eye when you speak to him and responds thoughtfully to questions. He plays various sports, he says, but golf is his favourite “by far” and he can’t help thinking about it while in class.

His long-term goal is “going to America to play in the Masters”. Though an “immense talent”, says Faulkner, Jack is at the start of a frightfully long fairway. And yes, it could culminate in his winning as an adult on the PGA Tour. That is one possible future.

Experience tells us another is that he quits golf before he’s 15. Jack has sensible people around him. His parents, Brooke and Matt, are determined he practise and compete primarily out of love for the game. And his 82-yearold maternal grandfather, Michael Withers, knows a lot about elite sport, having competed in water polo at three Olympics. “I’d love to think,” says Withers, “that I could help guide him.”
– Daniel Williams

Click here to view the digital article in Pittwater Life 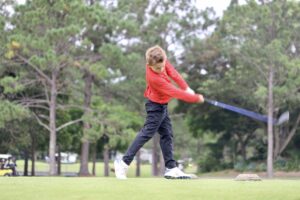